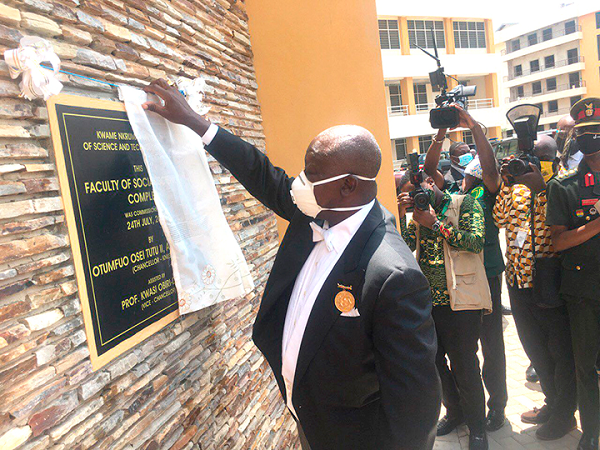 Asantehene, Otumfuo Osei Tutu II, unveils a plaque to inaugurate the new Faculty of Social Sciences Complex at the KNUST in Kumasi.

The Asantehene, Otumfuo Osei Tutu II, has inaugurated the Youth in Greenhouse Enterprise Project for the Kwame Nkrumah University of Science and Technology (KNUST), which seeks to create permanent employment opportunities for the youth in agriculture.

The Asantehene, who doubles as the Chancellor of the university, was assisted by the Minister of Education, Dr Mathew Opoku Prempeh, to perform the inaugurations to climax the investiture of the first female Vice-Chancellor of KNUST, Professor (Mrs) Rita Akosua Dickson.

The 20 greenhouses were built under the Youth in Agric Programme by the university and are aimed at contributing to the country’s import substitution and export trade by growing green pepper, chili pepper and tomatoes.

It was a partnership with the government and funded through a loan from the Exim Bank Ghana. It is being facilitated by a private sector company, Agripack Impact. The greenhouses were built at GH¢70,000 each.

He expressed optimism that the project would offer employment for the teeming graduate unemployed youth in the country.

Otumfuo Osei Tutu II also inaugurated a five-storey edifice for the school of Social Sciences of the Kwame Nkrumah University of Science and Technology (KNUST), as part of measures to accommodate the expected huge numbers of the first batch of free senior high school (Free SHS) students.

The four-year project which cost GH¢64 million, was funded through the university’s Internally Generated Fund (IGF) and executed by Berock Ventures Limited, a local construction firm.

The building has 25 lecture halls, 100 offices for lecturers and supporting staff, seven secretariats for heads of departments and a 1,200 capacity auditorium.

The disability-friendly edifice, also has studios, research laboratories, a computer research centre for postgraduates and a 250-capacity car park.

With two elevators, which make it easy for users to access the facility, the building has two separate libraries, one on the first floor and the other on the second.

After a tour of the complex and other projects, Otumfuo commended the authorities of the university for supervising such a ‘great edifice’.

He also commended highly Prof. Kwasi Obiri-Danso, the immediate past Vice-Chancellor of the university, for his role in actualising the project.

Construction of the centre was funded by the Chief Executive Officer of Japan Motors, Ghana, Mr Salim Kalmoni; with support from other Muslim bodies.